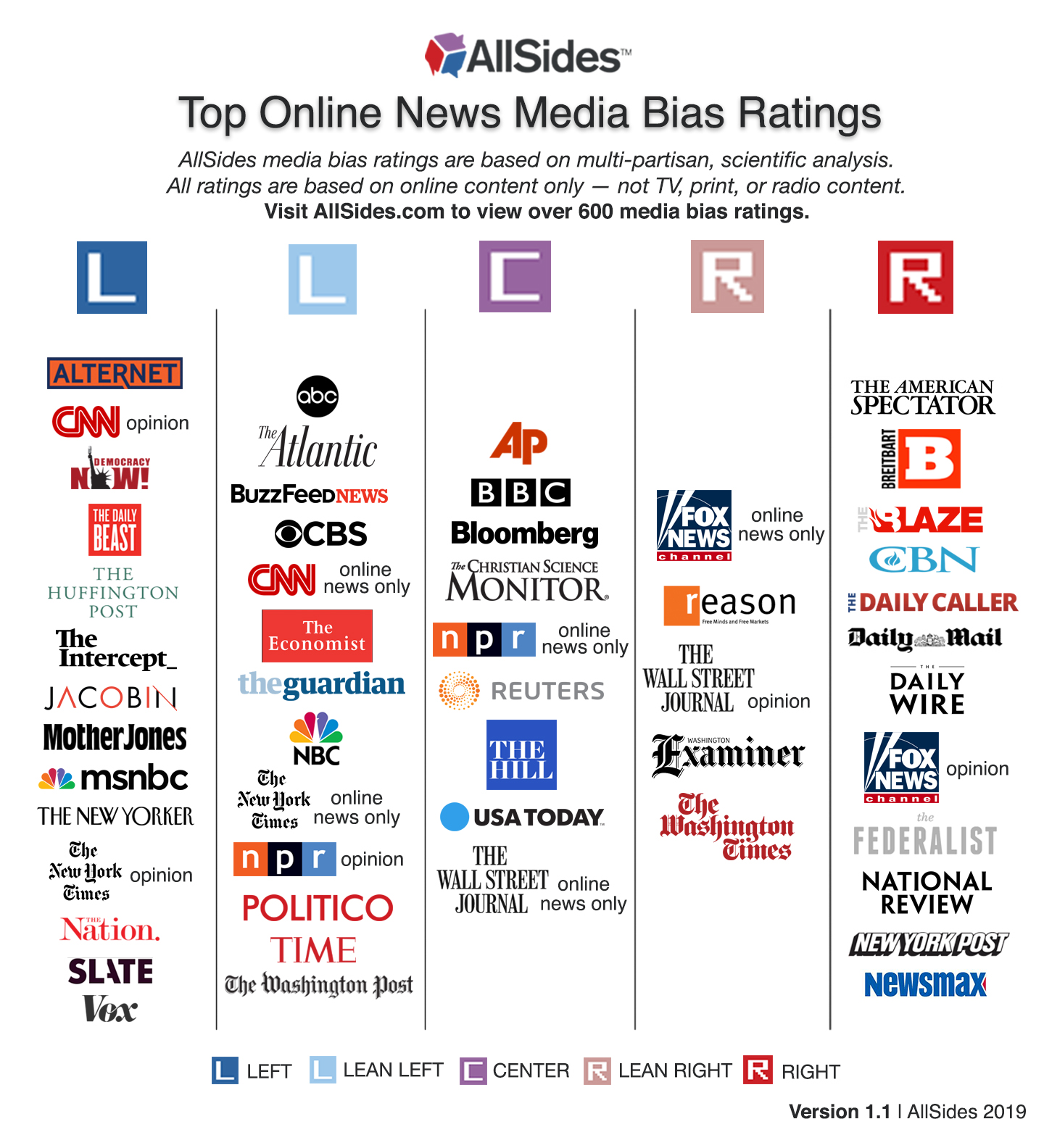 The pertinent part of the site looks like this. The arrow points to the useful search box on a very cluttered, ad-filled site, listed here with MANY RESERVATIONS (below). Click on the screen shot below or here to search.

When reading articles from various magazines and newspapers, you will sometimes notice a trend in the types of articles/subjects featured, the writing style of the authors, or the opinions in the editorials. Many periodicals have a general "slant" in one political direction or another. Some are outright and others are more subtle. An awareness of this is valuable when you select the sources for your research.

Here is a list of magazines and newspapers showing their leanings or emphases.  This list was taken, with permission from Micca Gray, from her Santa Rosa Junior College Library LibGuide, Annotations have been made in brackets.

America.  Although sponsored by the Jesuits, this periodical shows no religious bias. Covers contemporary social, ethical and political questions.

American Spectator.  Articles focus on issues of concern to both traditional conservatives and neoconservatives.

Bulletin of the Atomic Scientists.  Experts address the “political, ethical and social aspects of nuclear science.”

[Christian Science Monitor.  Viewed as either center or liberal, depending on the source.]

Chronicle of Higher Education.  Provides the most complete coverage of the world of higher education in America.

Commentary.  Sponsored by the American Jewish Committee, this outstanding periodical is a “strategic forum for policy debate on a critical range of issues.”  Neoconservative.

Commonweal.  Although this is a Catholic periodical most articles are nonsectarian and liberal in point of view.

Congressional Digest.  Each issue is devoted to the pros and cons of one topic of debate in Congress.

Conservative Chronicle.  A reprint periodical which features some of the best syndicated conservative opinion and commentary.

CQ Researcher.  Each detailed 6000 word report objectively covers a current topic of interest.  This is a good source to help a student select a topic for research.  The “At Issue” column covers pros and cons of controversial issues.  Bound volumes contain a ten-year index. Also available online.

Current.  An unbiased reprint periodical which selects articles for originality and relevancy from over 600 publications each month.

Current History.  Each issue of this journal of contemporary world affairs targets for discussion a single country, region or continent.

Daedalus.  Each issue of this publication of the American Academy of Arts and Sciences is devoted to a theme relevant to contemporary American society. Available in Student Resource Center database.

E Magazine.  An independent periodical with articles on a wide range of environmental topics.

Foreign Policy.  Published by the Carnegie Endowment for International Peace, a typical issue contains about a dozen articles on American foreign policy and international relations.

Futurist.  Published by a nonprofit, nonpolitical society, each issue contains provocative articles dealing with all aspects of the future.

Governing.  Published by Congressional Quarterly, each issue focuses on state, local, and intergovernmental problems and issues.

Humanist.  Focuses on social and moral issues from the humanist viewpoint. Articles are thought-provoking and sometimes controversial.  Liberal.

Issues and Controversies on File.  This digest of news analysis and background information provides an objective presentation of current issues and controversies. Available in Facts.com database.

Maclean's.  Similar to newsweeklies in the United States, this magazine reports the news from a Canadian perspective.

Mother Jones.  A readable and provocative magazine, supporting social and political reform from a left-of-center perspective.

Nation.  Features some of the best left-of-center writers of this country.  Articles cover social and political issues.

National Review.  The best conservative periodical in the U.S. today.

New American.  The voice of the John Birch Society, this magazine offers a right-of-center view of the world.  [Not indexed]

New Leader.  This bi-weekly newsmagazine offers a variety of opinions and reviews.  Liberal.

New Republic.  One of the best sources of political commentary.  Neoliberal.

New York Review of Books.  Excellent source of commentary on new books and the ideas they contain.  Liberal.

Newsweek.  One of the three major news weeklies published in the United States, this magazine covers domestic and world affairs from a middle-of-the-road perspective.

Policy Review.  A major forum for conservative debate on the major political issues of our time.

Society.  Prominent authors write on social science and public policy.  Focus is on the U.S.  Available in Sociological Collection database.

Time.  Similar in content and format to the two other major U. S. newsmagazines, this periodical covers the news from a centrist point of view. [NOTE: Others label Time liberal or leftist.]

[The Week. Selects contents from an assortment of newspapers and publications in order to present a range of views on a news topic.]

U. S. News & World Report.  One of the three major newsweeklies published in the United States, this magazine tends to focus on the practical issues associated with current events.  Moderately conservative.

Vital Speeches of the Day.  Each issue contains reprints of 8-10 speeches on vital issues given by leaders of public opinion.